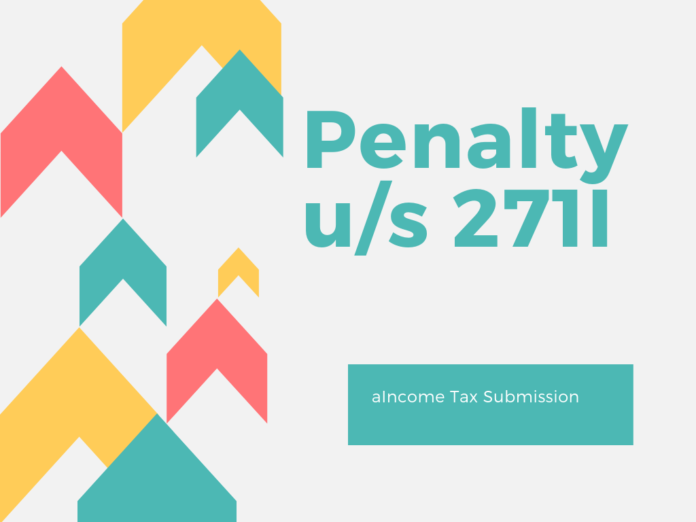 Notice u/s 271I states that if the assessee has failed to furnish information or has furnished inaccurate information u/s 195(6) in form of filing of Form 15CA and 15CB, there is a penalty for Rs. 1,00,000/- for each such default. Now, previously Form 15CA and 15CB needn’t be submitted in the case of transactions involving import of goods from non- resident or foreign company if the same is not chargeable to tax. But the provisions of Sec. 195(6) of the income tax Act were amended by the Finance Act 2015 and which came into force with effect from 1-6-2015 which asked the assessee to file 15CA irrespective of whether the amount is chargeable to tax or not , subject to some exemptions in Rules. The failure to comply with Section 195(6) attracts penalty u/s 271I

Penalty for non filing of Form 15CA & Form 15CB was also introduced through Section 271I. Now the following Paper gives the line of action in drafting submissions before Assessing Officer or Appellate Authorities, and an Penalty u/s 271I can be dropped/ not imposed on the basis of two grounds

At the outset, it is important to discuss the interplay of provisions of Section 195(1), Section 195(6) and Rule 37BB. The relevant sections are reproduced as under –

The person responsible for paying to a non-resident, not being a company, or to a foreign company, any sum, whether or not chargeable under the provisions of this Act, shall furnish the information relating to payment of such sum, in such form and manner, as may be prescribed.

“The person referred to in sub-section (1)shall furnish the information relating to payment of any sum in such form and manner as may be prescribed by the Board.”

Further Section 195(1) reads as under

“Any person responsible for paying to a non-resident, not being a company, or to a foreign company, any interest [(not being interest referred to in section 194LB or section 194LC)] [or section 194LD] or any other sum chargeable under the provisions of this Act (not being income chargeable under the head “Salaries” [***]) shall, at the time of credit of such income to the account of the payee or at the time of payment thereof in cash or by the issue of a cheque or draft or by any other mode, whichever is earlier, deduct income-tax thereon at the rates in force”

On perusal to the above, it is clear that Section 195(1) is applicable only when the payment is made to the non-resident and such non-resident is chargeable to tax in respect of the said payment. It is also clear that earlier, information u/s 195(6) inserted by Finance Act, 2008 was to be provided for only those payments which were covered by 195(1) ( i.e. chargeable to tax) however due to amendment by Finance Act 2015, Section 195(6) was made applicable to all foreign payments w.e.f 1.6.2015. Thus, the earlier provisions of sub-section (6) of section 195 of the Act provided that the person referred to in section 195(1) of the Act shall furnish prescribed information under Rule 37BB in Form 15CA/15CB. Thus, earlier remitter was required to report foreign remittances in Form 15CA in respect of payments chargeable to tax. Now the amended provisions of Section 195(6) made a reference to Rule 37BB however it is submitted that Rule 37BB was amended w.e.f 01.04.2016 and not 01.06.2015.

Thus, from the above provisions, it is clear and it is submitted that operative Rule 37BB when the assessee made foreign payments for raw material (even after amendment in Section 195(6) w.e.f 1.6.2015) stated that the Form 15CA is to be furnished only when payments are chargeable to tax. It is undisputed that the payments on account of purchase of raw materials was not chargeable to tax and there was no liability of TDS also and hence Form 15CA/15CB was not required and hence it is submitted that no penalty u/s 271I is to be levied.

There is also no dispute to the legal proposition that penalty u/s 271I is not mandatory but  is discretionary and AO has to exercise his judicial discretion before levying the penalty. The use of the word “may” in Section 271I clearly shows that discretion is conferred on the AO to impose penalty or not to impose the penalty having due regard to the facts and circumstances of the case. Hon’ble Supreme Court in the case of Hindustan Steels – 83 ITR 26 observed that penalty will not be imposed merely because it was lawful to do so. Now, further the provisions of Section 273B is reproduced below for ready reference:

273B. Penalty not to be imposed in certain cases

Notwithstanding anything contained in the provisions of [section 271-I,no penalty shall be imposable on the person or the assessee, as the case may be, for any failure referred to in the said provisions if he proves that there was reasonable cause for the said failure.

Thus, section 273B clearly states that no penalty shall be imposable on the assessee, for any failure referred to in certain provisions if he proves that there was reasonable cause for the said failure. The provisions listed in Section 273B includes penalty levied under Section 271I and the assessee submits that he was of the belief that no Form 15CA/ Form 15CB is to be furnished for import of raw material.

It is also well settled that the expression ‘reasonable cause’ must receive a liberal interpretation so as to advance substantial justice.

Hon’ble Delhi High Court in the case of Woodward Governor India (P) Ltd. – 253 ITR 745 has observed as under

“Reasonable cause as applied to human action is that which would constrain a person of average intelligence and ordinary prudence. It can be described as probable cause. It means an honest belief founded upon reasonable grounds, of the existence of a state of circumstances, which assuming them to be true, would reasonably lead any ordinarily prudent and cautious man, placed in the position of the person concerned, to come to the conclusion that the same was the right thing to do. The cause shown has to be considered and only if it is found to be frivolous, without substance or foundation, the prescribed consequences follow.”

So it can be understood that penalty cannot be imposed, if the assessee is able to prove that there was reasonable cause for the said failure of not complying with the condition to file 15CA when goods were imported. Thus, before 1.6.2015, the Act as well as Rule was applicable for payments which are chargeable to tax. Since there was amendment in the Act w.e.f 1.6.2015 but no corresponding amendment was made in Rules 37BB, the assessee was of the bonafide belief that Form 15CA/Form 15CB was not required during this operative period of 1.6.2015 to 31.3.2016. Further the authorized person viz bank through which foreign payment was remitted did not require the assessee to furnish Form 15CA before making such payment which shows that the Banks were also not aware of such provisions. Hence these arguments proves bonafide belief of the assessee and thus once bonafide cause is shown, the same may also please be considered as reasonable cause for non-imposition of penalty u/s 271I more so when there was no loss to the Revenue being caused as the payments were not chargeable to tax.

Penalty for non filing of Form 15CA & Form 15CB was introduced through Section 271I. Now, Penalty u/s 271I can be dropped/ not imposed on the basis of the two grounds discussed above. However it is also important to understand that, whenever there is an Amendment in law, and the corresponding Rules are not in parity with the respective Act then in case of any conflict between the Act and Rules, the Act shall prevail, but as in this particular situation, it might be helpful to prove that since Rules were not changed, assessee had bona fide belief and reasonable cause and hence relief can be claimed in view of the provisions of Section 273B.