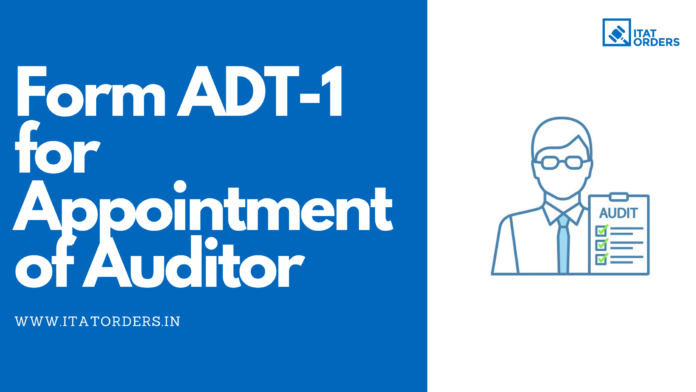 When a company appoints an auditor, it is obliged to accept the appointment of an auditor to the Registrar of Companies (ROC) in a specified manner in compliance with section 139(1) of the new company act 2013. In this reason the Form ADT-1 is used.

Under Section 139(1) of the New Companies Act 2013, a company shall disclose its appointment to the auditor and, at the same time, notice of such appointment must be filed with the company registrar within 15 days of the appointment. Such note about the appointment of an auditor must be filled out in the MCA portal in Form ADT 1 as per the law.

I’ll narrate you a brief understanding of the ADT-1 type through this post. This is where we go:

Form ADT-1 may be referred to an intimation sent by any company to the Registrar of Companies concerning the appointment of an auditor following the assumption of its Annual General Meeting u/s 139(1) of the Companies Act , 2013 (fourth proviso to subsection ( 1)).

According to Sec 139 (1) of the new Companies Act 2013, it is mandatory to file this form every year with the Registrar Of Companies as a notice of appointment of auditor after the AGM wherein the new auditor was appointed.

When to file ADT-1 Form?

IN CASE OF NEW COMPANY INCORPORATION:- Form ADT-1 is expected to be filed within 15 days of the company’s first board meeting, to be held within 30 days of incorporation in which the auditor shall be named by the company’s board of directors.

FOR EXISTING COMPANY:- The corporation will file Form ADT-1 with the company’s registrar within 15 days of the AGM in which Auditor was appointed or reappointed as the case may be. For e.g., if an AGM of the company was held on 30 August 2020, the company should file Form ADT-1 by 14 September 2020.

What are the Documents required?

The filing fees of form ADT 1 with the registrar of companies are as follows:

Also Read:
What are the Amendments

Form ADT-1 matters most when it comes to appointing an auditor to your company. Such Forms are required for businesses to file within the specified 15-day deadline. Where the Company is appointed as First Auditor pursuant to Section 139(6) of Company Act 2013. It can therefore be concluded, in the light of the above provisions that we do not need to file Form ADT-1 mandatorily for the appointment of the Company’s first auditor.

In the earlier tax regime, after corporate tax of 25% to 30% (effectively 33.99% including surcharge and cess), the Company was also liable to...